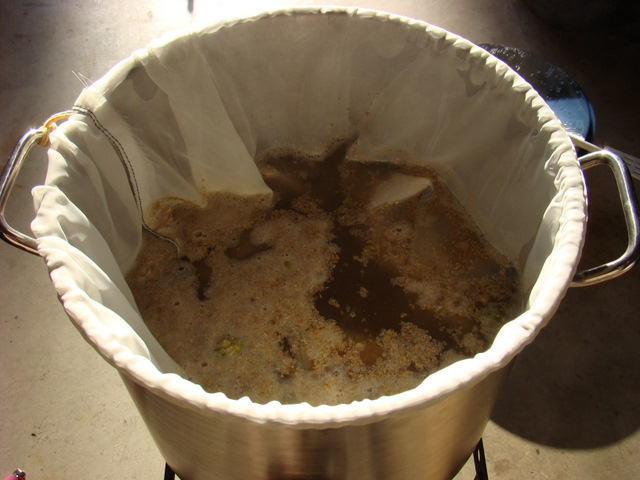 This is a guide to making a beer with the minimum amount of gear possible. A lot of this kit you’ll be able to find in your kitchen – but even if not, you should be able to get started for under £30. I’ll update it in time with a video, some pictures or even a fancy infographic but this’ll do for the time being.

This method is heavily inspired by the BIAB (Brew in a Bag) brewing method. The main difference between this and the traditional homebrew method is that you don’t have a separate vessel for mashing and boiling and you can use the full quantity of water for the final wort in the mash. I tend to sparge (pour a kettle or two’s worth of warm water over the grains once they’re out of the wort) to extract a decent amount of sugar from the grains but it’s not essential.

The recipe is at the bottom of the page.

One of the things that can overwhelm (it certainly did me) and even put off the homebrewer at the start is the sheer number of ingredients available. After a while you do get used to it but it’s a bit of a hump. I’ll try and explain what you need right at the start at least.

Most beers have a base malt (for fermentable sugars) like pale or pilsener malt and a speciality malt (for flavour and colour and not so many fermentables). To start out find a recipe with either pale malt only or pale + crystal. I’ve chucked in a bit of torrified wheat to the recipe as this helps with head retention (keeping your head for as long as possible!).

Again, get what you need once you’ve decided on a recipe. Store in sealed bags in the freezer once you’ve used them. For your first beer try just using a single type of hop – I’ve used American hop type Cascade for this one.

Get some Safeale S-04 or S-05. They’re proper workhorses and you shouldn’t have any issues with stuck fermentations or the like. You’ll learn that different yeast give off different flavours in due course but for the time being, don’t worry. Make sure the temperature where they’re fermenting is a stable and 18-20C. Higher or lower and you may have some issues.

Most people don’t tend to worry about water in the beginning. I’d tend to agree but I would also say that it should be high on the list of your priorities to get organised – it’ll have a massive effect on your beer quality. Head on over to our Brighton water page if you’re in the area and you should have a decent enough idea about what to do with your water treatment. Head to Murphy and Son and get a water test done if you want your water properly treated.

All of these you can get online somewhere like the maltmiller or brewuk. I can supply some as I have a few spares.

The hops are added at different intervals depending on whether they’re bittering or aroma hops – bittering at the beginning and aroma towards the end. In most recipes the boil is 60 minutes and hop additions are indicated as time before the end of the boil – ie “60 minutes” at the beginning and “15 minutes” is in the 45th minute of the boil. Do make sure you have an accurate way of measuring the hops as small amounts can be important at this quantity. I’ve got a scale that measures down to 0.1grams – they’re less than £10.

You need to cool down the wort (the liquid) as fast as possible now. I just chucked it in a sink full of cold water and changed it once. Took about 30 minutes.You can add ice to speed this up. You can get or make an immersion chiller, counterflow chiller or better still, a plate chiller if you’re working with larger volumes of wort. It needs to get down to at least 20C for it to be right. Any higher and you might risk damaging the yeast.

It’s important to know that at this stage, you need to pay special attention to hygiene. After the boil, you want the least amount other bugs to come in contact with the wort – so clean and sanitise everything that the wort comes in contact with.

Note: at this stage you could use a hydrometer (it’s a glass tube that sits in another tube with the beer at room temperature in it – how high it sits determines the sugar content) or refractometer here to measure the “Original Gravity”. This is a measure of the sugar content in the beer before fermentation has begun. This will help for a couple of things:

I’m guessing no one needs instructions for this part… Just send me an invitation!